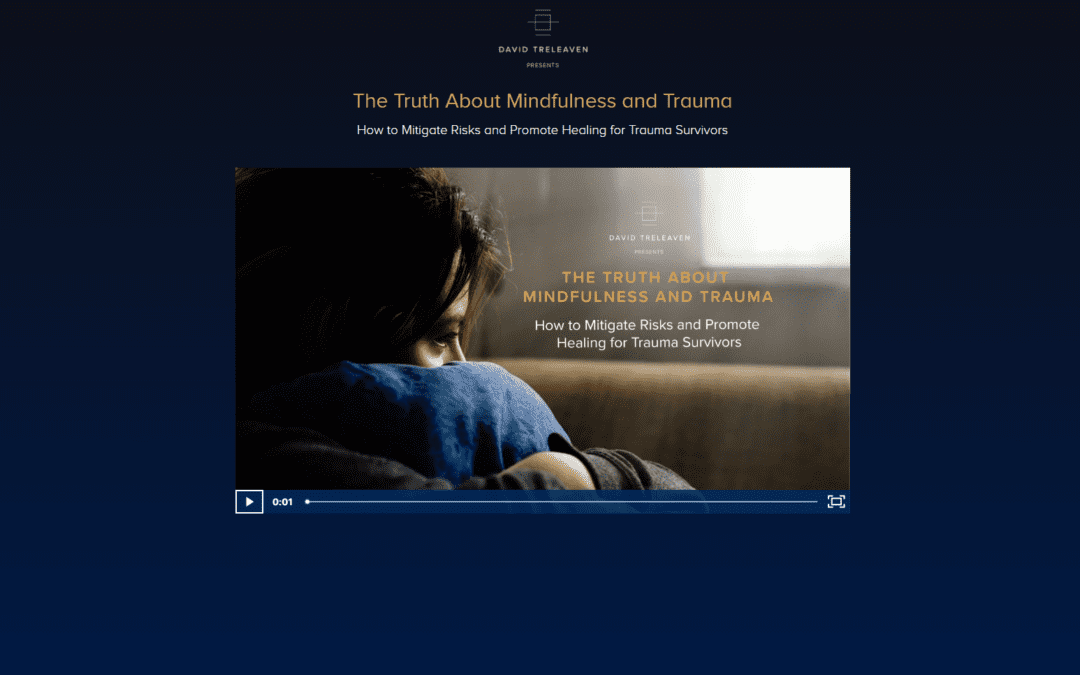 Trauma Sensitive Mindfulness is in the latter category. Not only do I enjoy working with their crew, after learning about their philosophies and the ideas behind their products through working with their company, I now personally think that trauma-sensitivity is a powerful and very-relevant skill for mindfulness practitioners to have, especially after the year that many have had in 2020.

As someone who practices meditation myself, I see the need for the product that they sell. They’re not selling crappy China-made products on eBay or McDonalds Happy Meals. Their product has the potential to help thousands who have experienced trauma to heal and live more fulfilling lives. And this just adds to the pleasure I get when I get to help them with my services – I know that my time is going to a good cause.

When an online education company does a course, they often have two formats that course will take in the long run: live and evergreen. The live format is where the course is given in real time. Participants have access to live coaching and teaching calls with the instructors. Often these courses cost more and provide a highly personal experience.

After the live course is complete, online education courses will often “evergreen” their materials. What this means is that they will remove from the video files anything that would tie the course materials to a particular time, place, or cultural situation. These elements could include:

After these elements are removed, the course is re-offered as an evergreen course on “drip”, meaning that course materials are delivered to clients as-if they were live, though, none of them actually are. Generally the evergreen course costs less than the live version but has the benefit of being available 365 days a year.

Trauma Sensitive Mindfulness wanted to go through this process with the two courses I had already edited for them. For more information on those courses, see my last write up on their 201 course here. My job would be to take edit notes that they provided me, go back, and make changes to the courses so they could be sold in an evergreen form. The edits that I would make to the videos included:

I keep all of my archived media for at least two years after the project is complete. Doing so makes projects like this possible and smooth. When a client requests a re-edit, I simply go to my archive drive, pull up the files, transfer them onto an in-use drive, and we’re in business.

I maintain a draconian file-management structure to make sure that all files related to a project are included in the project folder. However, even with this filing structure, my best efforts sometimes miss a few files here and there, as was the case with this project. When I transferred all the media back onto my current hard drives, there were a few files that were missing.

However, this problem was easily solved: the team at Trauma Sensitive mindfulness – thankfully! – still had the few files that I needed. I was able to re-download them from Google Drive and do the re-edits off of those files. Simple problem, easy solution.

At the front end of the project Trauma Sensitive Mindfulness delivered me large decks of redesigned slides that would replace the current slides on the videos. However, once I started actually going in and replacing slides, it quickly became apparent that there were some slides missing from the decks. After reaching out to Trauma Sensitive Mindfulness, we realized that these files had been neglected in the redesign and would need to be created from scratch.

Unfortunately, this posed another problem. I was scheduled to travel for a film shoot in the middle of September, and we began the project in early September. I had planned to be able to deliver all the files before I left; however, the missing slides necessitated pushing back the dates at least a week or so, which would mean that the final files would not be able to be delivered until after I had left for my production

This is a problem that I have thought ahead about. Since I travel quite often for a variety of personal and business reasons, I have created a fully-mobile system for editing projects that I can use to work while on the road. I had anticipated that a deadline push back could be a problem for this project, and so when I set up for the edit, I set it up on my mobile drive. And that turned out to be a good decision. When the deadline was pushed, I was able to simply go on my trip and finish up the loose ends while on the road. The final files were delivered after the originally set date (as often happens), but we were able to replace all the slides after the missing ones were redesigned.

Other than these small issues (well, small on my end!) the project went off without a hitch. I delivered both the 101 and 201 course evergreened and ready to be distributed.

You can find the webinar lead-magnet for the courses here.

You can find the landing page for the courses here.

I’ve actually learned quite a bit through listening to David’s teaching and interviews with other mindfulness experts. If you’re some sort of a mindfulness practitioner, you should seriously check them out. They provide a lot of value for those who seek to use mindfulness to recover from traumatic events in their lives or anyone who uses mindfulness professionally so that they can be aware of the implications for people who have been traumatized.

So remember, everyone: 2020 has, for many, been a traumatic year. Our windows of tolerance have been narrowed in many, many ways. But if there’s one thing that can be learned from the Trauma Sensitive Mindfulness courses, it’s not a particular media strategy. It’s that even in light of trauma, there’s always hope to heal. And mindfulness, when used properly, can be a powerful tool to help.