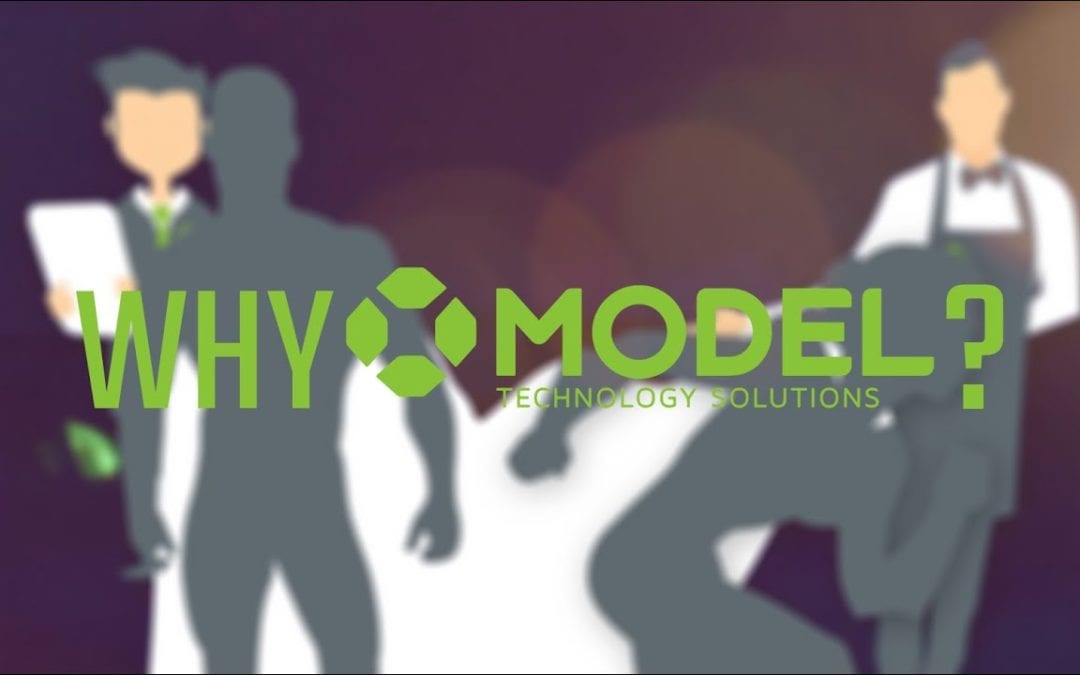 There are some projects that are carefree and relaxing. Like floating down a river in an inner tube, all you do is avoid the banks, rocks, and eddies and let the current carry you. And then there are some projects that feel like jumping to the moon on a Pogo stick. Every time you get off the ground a little bit, you’re slapped back down by the ever-present forces that are trying to keep you from getting off the ground.

2020 was one of those years that was not friendly toward the carefully-laid plans of mice and filmmakers. And Model Technology Solutions IT Superhero Video Production was one of those projects. During this project, there were a number of circumstances that caused an exceptional amount of rewrites, updated strategies, pivots, and ultimately taking the project in totally different directions than was originally planned.

That being said, like the Avengers at the end of Marvel Movie 975 (or are we at Marvel Movie 976 yet?), even when things seemed at their worst, when it seemed like all was lost, even when Thanos had snapped, our superhero team picked ourselves up, dusted ourselves off, adapted our strategy, and ultimately came out with some awesome media.

This the story of that video.

Model Technology Solutions was my first client. Pretty much the week that I started We Heart Create in January of 2019, Steve Bowman with Model Technology Solutions hired me to create an animated explainer video for him and his company. The projects continued after that. Mostly small design projects here and there, an occasional more creative project that included designing a series of playing cards for his packaged offerings on Microsoft Azure or designing a logo and landing page for their new software suite Objur.

Fast forward to early 2020. Steve approached me about creating new advertising media. He wasn’t quite sure what what he wanted; that was part of what he was consulting me about. And through a series of conversations, we decided that a video about the company to be used on their website and in other advertising mediums would be a good start, especially considering my background and skill set in video production.

We decided initially to use the IT Superhero marketing metaphor that Model had been using to that point. In the superhero universe of Gotham, Batman has a team of fellows that help him to fight bad guys by doing certain tasks. And Model Technology Solutions is, in many ways, like this team, the Alfred and Lucius Fox to their IT Directors’ Batman. They help the IT directors and system administrators that they serve by, first, like Alfred, taking care of the boring, day-to-day tasks so that the techs can be out in the field fighting the bad guys (e.g. taking care of the really important IT tasks!). They also, second, like Lucius Fox, provide custom solutions to the directors, technically advanced ways to solve the problems that the IT directors face day after day managing their IT infrastructures.

Over the course of several weeks, we came up with a script. It was a live-action, humor-driven video in the format of many of the videos being produced by Chambers Media – a funny romp through the services and products of a particular company.

After the script was complete, Steve requested a storyboard go pitch it to the higher-ups. Now, I’m about as good at drawing as Alfred would be fighting Bane. I dabble in it and have a sketchbook, sure. But when push comes to shove, my drawings look more like Play-Doh figures than actual human beings. Here are a couple of images of the my storyboards, mostly for comic relief: 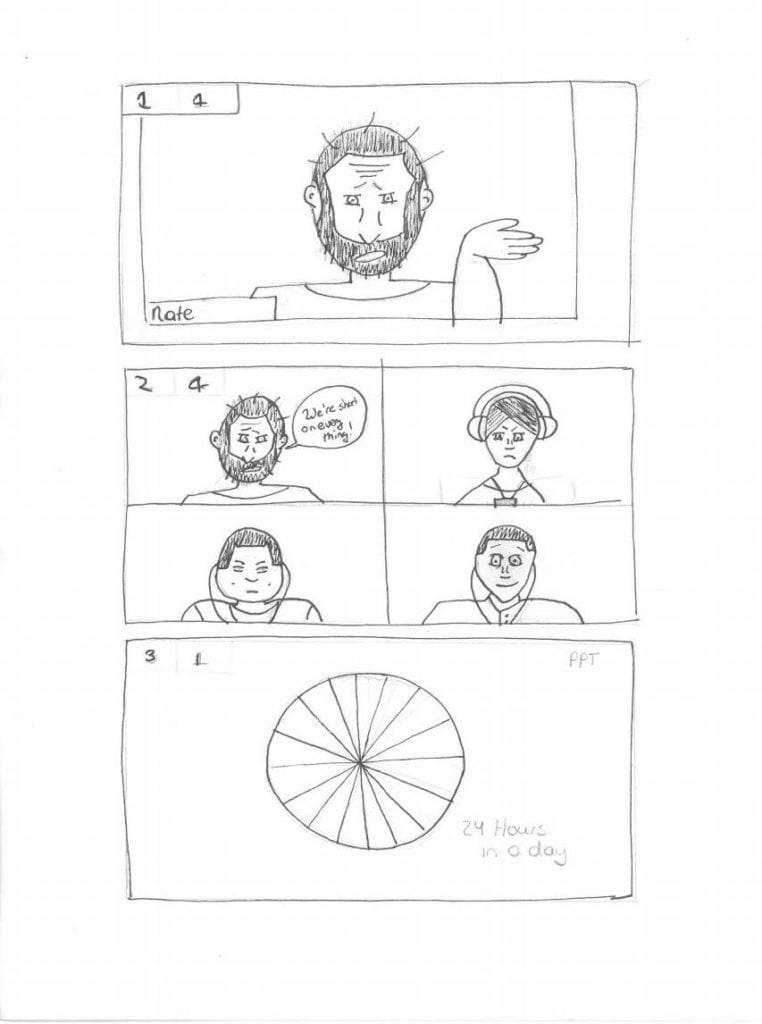 And it takes me forever too… And so I asked Steve if I could have a week to create them. He said yes, and so one-weeks-worth of evenings I spent at my writing table, drawing little figures to go along with the script.

After it was done, I scanned them and sent them along. They weren’t great. But like the Michael Keaton Batman films, I guess that they were good enough for Hollywood! The project was approved, and we were in business.

I started pre-production, calling actors, connecting with locations around my area, ordering props for the sets, the works. This is always an exciting time in a production; I’m meeting new actors and new business owners who I’m asking to use their location for productions. I’m also just generally getting excited to be on-set again.

It’s also somewhat of a stressful time. Putting together a live-action video is a bit like doing a puzzle, but first you have to find all the puzzle pieces which have been strewn around your particular geographical location. This was particularly difficult for this project because this was my first production in my new home in Roseburg, Oregon. I knew very few people and had very few connections in the community. And connections are the lifeblood of a filmmaker.

And then it hit.

We were in the middle of pre-production when COVID-19 started to spike in the United States. And when it did, everyone shut down, emotionally and practically. Businesses didn’t return my phone calls, actors met with me then I never heard from them again. Amazon started delaying orders on non-essential items which, in some cases, meant my video props. Things dropped like bad internet connection, as many of you know, and everything related to the production came to a grinding, screeching halt.

And it gets worse.

Before we began into pre-production, Steve had asked me the question, “What about copyright? Is there any chance that the names of Batman, Alfred, and Lucius Fox could be under some sort of trademark?”

And ignorantly, in all my brazen arrogance, I said, “Of course not, they can’t copyright a name, can they?”

And yet even as I said it, I had a sneaking suspicion that it wasn’t true. And after a couple weeks, I made the wise decision to double-check my own assertion.

The fun part of this is that I had the opportunity to talk to someone at Disney Studios that probably makes way more money than I do. Someone who gets to be connected to multi-billion dollar projects talked to dinky little old me, owner of dinky little People Project Media, located in dinky little Roseburg, Oregon. Yes, I reached out to Disney. And a very-helpful and sincerely apologetic licencing specialist informed me that their lowest-end licencing agreements started at $50,000. And yes, the name “Batman” was copyrighted, for all intensive purposes of producing this video at least.

I was sunk. We had a live-action script that we couldn’t use and nobody who wanted to help with filming even if we could.

It’s not the strongest creature that survives, it’s the most adaptable. When I began on this business journey, every business book I read told me that in order to be successful you had to do two things 1) hold close to your business center and 2) be adaptable. And during this time, number two was a truth was one that I held to. If this production was going to succeed, I would need to be adaptable. When everything fell through, I had to continuously remind myself that the project hadn’t failed, we simply needed to adapt… again…again…and again. The only question is if Steve and Model Technology would be patient enough with me long enough to figure out a new direction to pursue.

I met up with Steve and gave him the bad news. It was a tough meeting, but to his credit, Steve never dipped out. He really hadn’t really lost anything except the time waiting for me to figure out a new direction to take the video. He was very patient and understanding of the situation.

During that meeting, we brainstormed several ideas about how to accomplish the same goal with a different script and producing videos during the worst of the COVID surge. And what we came up with was a different form of video. This idea was Zoom-based and took advantage of the new means of communicating that was sweeping the world as fast as COVID was. It was a little bit edgy and unique. Steve said he hadn’t seen anybody else doing something like this; and, to this day, I haven’t either. It would feature the superhero metaphor but would not focus on it, and it would avoid using any proper names related to any superhero universe characters. We would have our cake and eat it too.

And so, for me, it was back into the writing studio, coffee brewed, comfy socks on, Chopin engaged, and ready for another try.

And another month and two drafts later, we finally had it, another higher-ups approved script that would be producible in the entirely digital, copyright-crazy planet that we call our home right now.

After this the production went pretty smoothly. I played the main character, Nate, and I filmed all the live-action scenes at one location, the Small Business Development Center in Roseburg. I had an entire office all to myself, nicely social-distanced. All of my other parts didn’t require actors and were also designed to be filmed on Zoom. The video incorporated animation to convey complex ideas in visual form which could be done in my office. We also captured some testimonials from Model’s clients on Zoom. It was the best video that we could produce given the world circumstances we were living in.

The production still went slower than I would have liked. 2020 was the year that everything slowed down. Coronavirus forced everyone to work differently, take breaks, emotionally rest, and respond to emails slower than they would have otherwise, probably for the best. But even still, in the end, I finally delivered a seven-minute feature on Model Technology that captures the problems that they solve, the services they use to solve them with, and the results they get for their customers.

And the reception? In the words of Steve, it was a video that was “loved by all” at the company. It’s now posted to their homepage here.

The supplemental media package is a post-production offer I often make to my video production clients. During a production, we often shoot way more video than we actually use. Or, as was the case with Model Technology Solutions, much of the media that was created was perfectly suited to be cut down into smaller pieces and used in different ways and for different digital platforms.

All of the animations that I created for the video could well function on their own with narration. Plus we had two testimonial interviews of which only tiny fractions had been used in the feature video. These could be cut down and used on the Model website on different pages to lend credibility to their claims.

In the end I was able to create these videos and load them onto Model’s WordPress site for them. Model Technology got not one but seven videos to be used on their website, on social media, in digital advertising and (and here’s a sneak peek into the next project that we’re working on!) in their new Managed Services digital funnel that they are building out through none other than People Project Media.

Examples of those videos can be found at these websites.