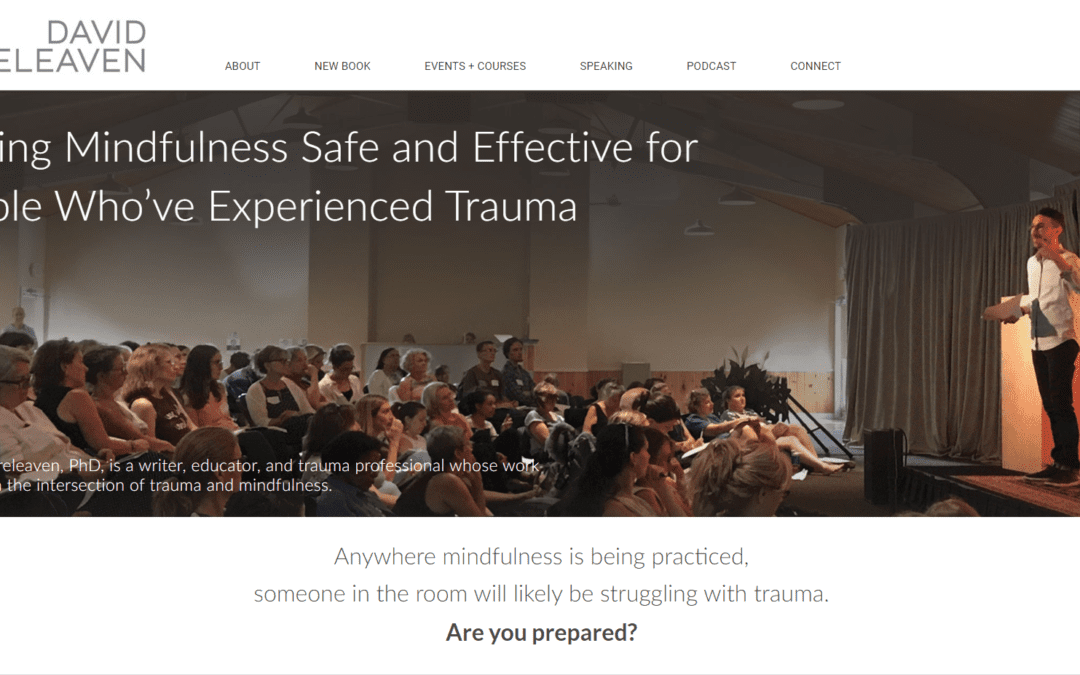 Word of mouth is your best source of lead generation in media. It’s as true today as it was in the days of the newspaper, the printing press, or the rock tablet and chisel. A quality recommendation from a satisfied customer who feels like they have experienced value from your service will trump any dollar number spent on Google Pay Per Click, SEO, or social media advertising, even in today’s digital world.

In August of 2019, I was approached by two members of the team at Trauma-Sensitive Mindfulness. They were interested in my services editing the videos of live-course Zoom sessions that were going to premiere later on that month.

They’d learned about my services through a member of the Evolving Wisdom team of contractors. And I hadn’t spent a dime on advertising.

Trauma-Sensitive Mindfulness is a relatively young online education company based around the work of a young writer and specialist named David Treleaven.

David is the writer of the book after which his company is named: Trauma-Sensitive Mindfulness. The idea behind his work and the book is that sometimes during mindfulness practice deeply-seated wounds and traumas can surface which can, in certain circumstances, be too traumatic to deal with through the practice and can ultimately end up doing more harm if constantly relived. And his book and teaching, from what I understand, help mindfulness practitioners to make their therapy and healing practices “trauma-sensitive”.

David focuses his efforts now on online courses that he teaches to small groups of interested specialists through the online video platform Zoom. And he and his team were about ready to premiere a class about the basics of TSM, and they wanted the videos and audios to be posted to their YouTube and Sound Cloud channels for the members of the course to (re)watch at their leisure.

The other aspect of the project was that they wanted the videos turned over within four to six hours of the module being aired.

Problems quickly surfaced related to the need for the videos to be turned over on a deadline. The goal was to turn the videos and audios over in four hours and have them posted to their YouTube and Sound Cloud accounts. Generally the edit and export of an hour-long course takes about three hours to complete from when the editing process begins. The editing process cannot begin until the edits to the video are given to the editor (which takes about an hour after the class finishes, at least in the way that the TSM folks were doing their note-taking). Using this logic, we estimated before beginning the actual course that, yes, a four-hour turnaround was possible.

However, there were one variable that we did not account for: Zoom processing times. After a Zoom call is complete, Zoom takes a certain amount of time (based on the length of the call and the types of media used while it is in progress) to process the video for download. In many of the calls, David used slide shows and other media to supplement his teaching. This significantly increased the processing time. Sometimes the call took 2-3 hours to process the video content. This meant that the editing process couldn’t begin until almost 3 to 3.5 hours after the call was done, making the 4 hour turnaround time unrealistic.

One attempted solution to this problem we tried was to reduce the resolution of the Google Slides screen share that David was using. And while this strategy did reduce both the processing and render time, it was not enough to deliver the video content to me with time enough to make the four-hour deadline.

Sometimes the only solution to a problem is to reassess your goals and expectations and make them more realistic, which was exactly what we did in this situation. Realizing the four-hour deadline was unrealistic to expect for every call, I and the team at TSM instead aimed to have the videos turned around ASAP after the call was finished, which ended up being between 4 and 6 hours after the call was complete depending on the complexity of the call and how long it took to process afterward.

Ultimately we weren’t able to hold rigidly to the original desired deadline of four hours, but we were able to efficiently and consistently deliver the product within about 6 hours of the call after every call. This was the first course the TSM team had produced, and they were learning just like I was.

And ultimately, even though we had these issues, the team was still extremely satisfied with the quality and timeliness of the products that I turned around and eagerly requested that I be available for future editing projects.

Will and [People Project Media] do exceptional work, I cannot recommend him highly enough… Will’s work was both timely and of superior quality. We won’t hesitate to work with him again.